7:20am I am due to meet Ray and a few other swimmers to catch a training swim. I meet Ray, Lou and skip and we all get ready to launch into Potter’s Cove. The water is reading 58.6 degrees in Potters cove on the computer, I am mentally prepared, I swam in 57 degree water on Thursday and my brain hasn’t forgotten I am ready for another round.
Ray is an ” English Channel swimmer “, he has made the crossing, I am an aspiring EC swimmer or an ” English Channel Wannabe” as I have heard others refer to swimmers like me preparing for an attempt. Ray lets me know that the other guys are swimming in wet suits yet we will still be faster than they are, our plan to swim a 1.2 mile leg across Potter’s Cove to a point, the landmark a big jetty, Ray asked about how I behave in the water when I get cold, also if I want to hug the shore or swim in a straight line to the midway point of our out and back course, “straight line for sure, I am a destination girl ” I reply, he is a destination swimmer too he says and  we agree that if we are cold at the jetty we will high tail it back to the beach,  if  we are not ” on the edge “we will hang out for a bit, swim back to pick up Lou and Skip, then swim back out to the  jetty with them and all head back together.
We are off, I spin my arms fast as soon as I dive in anticipating the impact of the cold, it doesn’t come, it feels balmy today, I am thrilled with myself and switch my focus to keeping Ray in my sights, he is faster than me, a strong swimmer with a smooth sighting technique that blends right into his stroke flawlessly, I quickly figure out my best tactic is to sight his bright red cap and arms splashing in the water rather than the grey jetty that I can barely make out in the distance, I do and it works well, after a while he pulls up and looks at his watch, it gives him a temperature reading, “63.4 degrees” he announces, I thought it was warm,  I laugh at the power of the mind, I was all prepared for 58 degrees today, when it turned out to be 63 I was lapping up the warmth  like a seal in the sun, 10 months ago I would have been freaking out at the thought and feel of a 63 degree swim, not any more compared to 58 it feels like a bathtub today…..acclimatization is starting.
The sun was rising as we were swimming and lit up the sky with colors of yellow, orange and red, as I rolled to breath I caught a birds eye view of birds heading south in flocks, they are all in flying in an organised fashion and look like  big ribbons in the sky.
The water is clearer than it has been on past swims, when it is shallow I can see shells and ocean life below. We reach the turn around jetty, tread water then swim back to check in on Skip and Lou, when we reach them we visit for a while and then swim back to the turn around jetty where we hang out and talk, I notice I am getting cold while we are talking and not swimming but say nothing, cold water acclimatization, “shut up and deal with it” I think to myself. Ray cues us to start the return swim, I soon warm right back up and enjoy the swim back, “don’t swim into a moored yacht on the way back ” I think to myself, how embarrassing would that be!
Ray is well ahead of me and is waiting on the beach with Skip as I swim in, a great swim.
We talk on the beach for a while and Ray offers some valuable tips on what had worked for him during his crossing and what had gone wrong. We talked about feeding, he had started swimming with a nose clip shortly before his Channel crossing, what didn’t work was it was hard for him to get his feed down while wearing his nose clip and  alot of his allocated feed didn’t go in his mouth, by hour 8 he said he was low on gas,” be sure not to give your feed to the ocean, and if you do take in more feed to compensate for the feed that went into the sea” I think to myself , I write the thought down in my journal when I get home.
We say our goodbyes and I am off to shower, eat  and get ready for an 11:00am Yoga Class at Pulse in Newport, it was great, then more food and off to first beach with my daughter Heidi and her friend Ada, it was a stunning afternoon 65 degrees, ice cream in hand we walked along the beach and then checked out the Newport Aquarium where I got to learn about some of the creatures I have been hanging out with in the sea with when I swim here in Rhode Island, it was cool check it out……
First, the Forbes Starfish 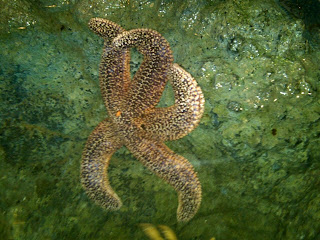 This guy has no muscles and uses water pressure to move and eat, he takes water in and out of the ” mother port”( that little orange dot in the middle of his body) it’s like his blow hole, he can see light and dark with an eye at the end of each of his 5 legs, I am definitely going to keep smiling when I swim now I know star fish have five eyes that might be looking my way.

This wee guy is like a starfish with all his 5 legs curled up under his body, he has little spines all over his body that look like pine needles, tough to see he blends into the rock he is hanging out on. 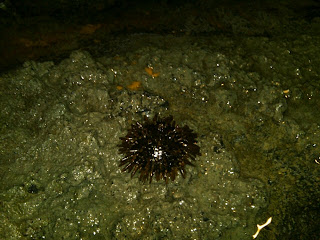 Last, but not least The Jelly Fish
Finally a Jelly Fish encounter but I am dry, no chance of a Jelly sting today, however I do get to learn alot more about them, their tentacles have stingers on them ( they look like floaty hairs) , they use their tentacles to catch and paralyse food and carry it to their stomachs. They move in the water by pumping their stomachs allowing them to move in the water mostly up and down, letting the currents carry them from side to side, hmmm……..know your enemy is the saying, I don’t think of the Jelly fish as my enemy but know I can’t take them lightly and they deserve respect, I will have to  learn  more about these.

Steaks for dinner and off to bed to get ready for tomorrow morning’s 9am swim time at surfers end of second beach, a new group of swimmers, I am excited to have company tomorrow and meet yet another group of swimmers. I still have sand behind my ears and on my neck from this mornings outing ( I promise I did shower!), what will I see in the water tomorrow and who will I meet? I will keep you posted.